So I was on gleemax today, reading up on "issues" with Dungeons and Dragons Fourth Edition multiclassing.  Since I don't have time to plan a playgroup, I have been trying out the rules by creating a few 1st level characters (one of each class).  My favorite was a Tiefling Paladin who had the multiclass Wizard feat.  I decided to advance him to see how that worked out in the new rules.  I started to get confused and disenchanted just advancing him to 11th level because I gave him all the multiclassing feats (3 total), which left him with few advanced Paladin powers and a pseudo-random wizard set.

Then I read a thread explaining that lots of 3.5 (and before) gamers had problems with the system (alright, it said Powergamers who exploited former multiclassing were winers), but it pointed out that the real power and point of this part of the system is to *dabble* or expand into another class, not get the best of both.  So I looked at the rules again, reflected on how the character would develop (due to the richer experience in 4e, you can't just advance characters as easily in my opinion).  He wound up with only one of the "power swap" feats and a paragon path (Battle Mage!), which seems to work so far.

Two poster presentations.  On this Monday in Anaheim, I started by attending the STS program on Creative Trends that Further Science Learning, a great set of talks including Science Photography and Gaming (which was also a great place to catch up with fellow members.)  But I had to leave halfway through to set up my first poster session "Instant Help: Creative Approaches to Chat Reference" in the STS poster session.  I had a brief chance to get a snack, before the attendees came and I was busy (thankfully!) the whole hour and a half.  No time to rest, I immediately packed up and got downstairs into the Exhibit Hall for the ALA poster session VI.  "One Librarian, Many Jobs" was a bit of a creative experiment that got a great deal of complements from "that's cute" to "I want one of those", but it also got a few instances of the feedback on the research I was really looking for.  I may have had more action than the other posters since I was on the end facing out and had an eye catching display, but there were still fewer people than I had seen in earlier session.

katieboyd) though we didn't sit around a table and each had our own hot pot it was GREAT.  I especially liked the beef.... no, not Kobe, just ribeye but very tasty!  My final event of the night was a meeting, yeah, but it was a bit fun since everyone was slap-happy at the end of the conference.  Tuesday is my departure day, so I hope I have better luck with flights than on the way in.

I almost missed my breakfast with the other EBSCO Scholarship winners, because I went to the Hyatt instead of the Hilton (H's!)  Then I spent a good amount of time in the exhibit hall with monkeys and beer.  Since that wasn't enough for lunch, Kevin and I grabbed some gyro platters.  The NMRT Committee meeting in the afternoon was productive for the Web Committee.  After that was the Book Cart Drill team which hopefully will be online in video like earlier years.  Next was the SIS and other library school event, which had some cool Pitt grads and some tasty food.  But we had to leave there quick to go to a Wizards of the Coast event with wine, cheese, and D&D.  It had a great presentation about RPG programs for public libraries with an example in the Fresno area.  The night ended with some time at the Best ALA Party, the 3M/NMRT Social.  It had some really good food, too bad it was our last stop.

The day started at 5:30am (PST) and ended at 1:00am (PST) the next day, today.  It was very good in many ways, connecting with friends and colleagues, doing some work for NMRT and ACRL STS, getting a "free lunch", loads of free books, and finally reliving a feeling of childlike wonder in Disneyland.  You can see some highlights on Flickr.

I got going early this morning too, so I will take a break as Mary suggested.

My conference started at 4:00am EST (time zones are important) when I woke up in State College, PA. By 5:00am I was at University Park Airport (SCE) and found half a dozen fellow Penn State librarians flying as well. By 6:00am we had cleared security (one seating area, like 3 gates) when they announced "mechanical failure" (what the late George Carlin referred to as "broken plane") which required a mechanic that was 45 minutes away. We waited and got free breakfast, I made some back up flights, but they told us another plane was rerouted (since there are a total of 9 flights out of SCE daily) by 9:30am.

Eventually both flights were canceled and they put some of us in a taxi (van) to Harrisburg Airport (MDT) just about a 2 hour drive.  There was free internet there and I got to enjoy an early lunch while waiting for the flight.  From there to Atlanta (ATL), which makes any flyer nervous, but where I was assured of a FIRST CLASS seat.  So I got to the next departure gate and the standby list is over 30 people, many looking pissed off, so I was very lucky to be on the plane.  We boarded and immediately I was treated to a Leinenkugel Summer Wheat!  I won't go into the other amenities I experienced apart from the "plebeian" coach classes, except the entertainment touch screen in front of me which had movies, tv, and Bookworm.  Bookworm is a word game and I thought it would be appropriate to play on the way to a library professional conference.  The results: 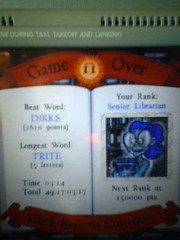 I achieved the rank of Senior Librarian (I passed by Assistant Librarian without even a tenure review!)  As a guybrarian I must protest the obvious gender bias in almost all the game's images.  Heh.

Finally my brother picked me up at LAX, which is a feat I thank him for, since I was originally flying into John Wayne (SNA) Airport about 10 minutes from his house.  We went to the Yard House for some beer and second dinner, which was pretty good but expensive.

I know that some parents have unrealistic expectations for their children, but when I see little Henry all swaddled up, I can't help but hope that some day he will be God Emperor of Dune.  Did Paul Muad'Dib ever consider this?

So far my favorite things about the new D&D rules are
1. Simpler math for attacks, saves and damage
2. The ability to CHANGE your choices of abilities later in character development (maybe best thing evar)
3. Cleric class is less cheesy
4. Powers for martial classes (to some extent)

My least favorite things
1. Most of the powers are attack and damage related, bleah, go utility effects (looking forward to rituals)
2. I can read World of Warcraft in almost every line (especially the Warlock class)
3. Despite that last comment, there seems to be less focus on skills and crafting, etc

Let me fill you in on another aspect of being a father.  Sleep.  Henry is actually a non-colicy baby (colic being a condition of unknown causes and many treatments that basically gives you a very fussy baby), so he sleeps pretty well.  In 24 hours, he sleeps:

What I should mention is that before each of these "moments of peace", either Mary or I have to walk him around for 5-20 minutes to convince him he really has to sleep.  Often after eating he is a bit milk-drunk and can go right to sleep (yay at night!)  Otherwise this works out to a tag-team system on the weekends.  During the week, since Mary is stuck doing it all day, I get evenings and night duty mostly.

Actually this is just half of a day (12 hours) and on the weekend too, but it is a representative snapshot.

4:00 am - wake up Henry (I'm not kidding you) since he has been asleep for 6.5 hours, change his diaper, rest while he nurses
4:30 am - walk Henry back to sleep, this takes around 15 minutes or so
7:15 am - all three of us wake up, change Henry's diaper, wash hands ;) start making coffee and pancakes
8:00 am - leave Henry and mom inside, he will go to sleep in 30 minutes, while I water the plants, cut the grass with a trimmer and lawn mower
9:00 am - come in and shower
9:30 am - watch Juno with Mary
11:00am - just before movie is over, Henry wakes up and I change his diaper, we finish the movie while he nurses
11:30am - Mary starts her lunch, while I play with the happy little man (he sits in my lap, then lays in my lap, then lays on his mat)
12:00pm - I eat lunch, Henry gets more fussy, so we get him ready for a nap
12:52pm - writing this entry after Mary finally gets him down to nap

I judged PJAS yesterday.  Pennsylvania Junior Academy of Science for those of you who didn't grow up in PA.  Anybody a former PJASer out there?
Collapse